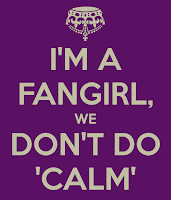 Fangirl Friday is a feature here on the blog where I talk about kickass reads and why you should like them, too. 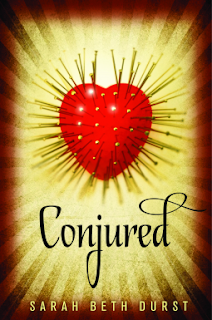 Genre: YA Fantasy (with a creepy circus/carnival theme!)

ARC received from Bloomsbury USA Children's Books in exchange for an honest review.

Dannie says: Conjuring up some time to read again ASAP.


Eve has a new home, a new face, and a new name—but no memories of her past. She’s been told that she's in a witness protection program. That she escaped a dangerous magic-wielding serial killer who still hunts her. The only thing she knows for sure is that there is something horrifying in her memories the people hiding her want to access—and there is nothing they won’t say—or do—to her to get her to remember. At night she dreams of a tattered carnival tent and buttons being sewn into her skin. But during the day, she shelves books at the local library, trying to not let anyone know that she can do things—things like change the color of her eyes or walk through walls. When she does use her strange powers, she blacks out and is drawn into terrifying visions, returning to find that days or weeks have passed—and she’s lost all short-term memories. Eve must find out who and what she really is before the killer finds her—but the truth may be more dangerous than anyone could have ever imagined.

The concept--It was a like not a love only because I feel like I've read a lot of memory loss stories recently in my online writing groups, but once I got to the carnival elements I was hooked!

Pace felt slow to start. Because the MC doesn't know where she's going or anything about her own story she is directionless and consequently her story felt the same way for me. This did change as she began bonding with other characters but it made the read slow out the gate for me. The payoff in the end was actually pretty cool, and I read the second half of the book in less than twenty-four hours, so pace was a like for me, but not a love.

A lot of GoodReads reviews dog out the pace/plot of the first half of the story completely, which tells me they're just not insightful enough to think about author intentions. For me it seemed authentic for the pace to be a little slow, for the reader to be a little frustrated, because the main character's situation sure as hell must have been frustrating. Can you imagine reading a horror story but not feeling fear? A comedy without laughing?

Zach's character. I love when the L.I. isn't a traditional hottie, particularly when that character is preferred over a hottie. And, okay, I sort of have a thing for nerds. But more than any of that I loved the role he plays at the story's conclusion. And that's all I'm gonna say about that because I hate spoilers.

Malcolm. I connected with him before any other character in the story, and yay for diversity, even if it isn't in the MC! I really loved that he was a role model for the MC.

The setting: the haunting and vivid imagery, the carnival. It had a very Night Circus vibe, which I loved, and Durst's descriptions were very real in my mind as I was reading. I even loved her descriptions of the Agency. The imagery kept me wanting to know more.

The suspense and mystery. I HAD to keep reading to find out what happened in the end. And when I got there I was totally rewarded for my sticktoitiveness.

The end of story payoff. This one totally took me by surprise, and--on the real--that NEVER happens anymore. Really, if you can surprise a writer who likes to put twists and turns all over her own ish, you're doing it right.

WHAT I WANTED MORE OF:

Nicer grownups. Aunt Nicki's sarcasm got old pretty quickly for me. Not in a way that impacted my opinion of the character so much as it annoyed me to read. It did improve over the course of the read, but it really put me off at first. I would have liked to have seen more growth from her as a character prior to the last few chapters.

Unreliable narrators are not for me as a reader. I barely got through LIAR and the ending left me pissed off that I'd invested time and energy in the read. I tend to avoid unreliables for that reason. I was worried for the first few chapters of CONJURED that it was going to leave me frustrated. But the payoff is definitely worth it! If U.N.'s make you stabby, though, this might not be the best book for you.

Short story long, I'd give this book 4 out of 5 stars. For the first half of the story, I did feel more frustrated by the pace and unanswered questions than I generally like to feel when reading for pleasure. But the payoff is AWESOME and completely unexpected. I'm actually looking forward to going back and reading this one again to look for all the clues I know I must have missed during my first read. So if you can handle unreliable narrators and a little befuddlement, check this one out. It really is super cool.

So add it to your Goodreads or pre-order via these links: