Suck It Up, Butterfarts, This is War: Lessons from the PitchWars Slush 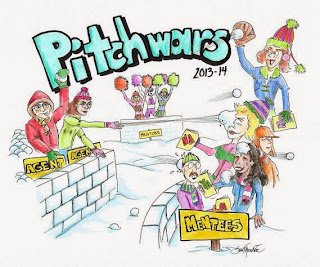 You guys know that I've been where you are. I know how hard this is. So as I was reading your wonderful words I've been struggling with how to make this easier on the 60 of you whose names are not going to be paired with mine for PitchWars. I promise you that I'm not kissing asses to help you guys feel better. I think you should know by now that's not how I ride.

The only thing I've come up with to cushion this is to utilize full transparency. My hope in doing this is that helping you understand my logic will make this feel less like you're personally being dissed and will also help you grow, which for me is the ultimate purpose of any pitch contest. I can promise you this: none of the decisions I made--not one single one--was made with favoritism or personal bias. I didn't reject anyone because I didn't like them or keep anyone because I knew them. I think you'll see when we get to my final three that that's not the case. And besides, I love you guys, all of you. I love your energy and your ideas and your words. Every personalized query made me grin like a friggin' Cheshire cat on Ecstasy and what I loved most was that you really listened to my wishlist and did your homework.

Of course, that's also what made this ridiculously hard to decide.

So, without further ado, here is how I narrowed #TeamDannie from 63 to 3 in a week.

~The first pass through the inbox I skimmed every single query and bumped out those that did not listen to my wishlist. Among those were 3 New Adult Contemporary Romances and 1 Zombie story. That's it. And I did that not to be a rule stickler bitch but because I really, really don't like that kind of story and in no way shape or form could ever see myself wanting to champion that kind of book. For those, I did not read the pages, just the query. And I expect that's what an agent would do in those situations, too. It is frustrating when you are so incredibly busy to feel like someone is wasting your time by not following directions, and it's unsettling to feel like you haven't been heard. If you're not listening to me in the query phase, you're not going to listen to me in the mentor phase either, so why should I bother?

An additional 3 manuscripts were rejected solely for conflicts of interest. One was a retelling of the same fairy tale as my NaNo project. One had an MC with a similar backstory and themes as my current NA WIP, and one was a peer from Scribophile who I don't think remembered that I had critted her pages early on.

This left me with 56 queries.

~My second pass through the inbox I was looking strictly at preparedness. How ready is your manuscript? Do you still have gobs of filter words in your first five pages? Does your first chapter open in a way that matches the story you sell in your query? Can you articulate in your query what your story is about in a concise, engaging way? Does your dialogue sound like dialogue or conversation? A month is too little time to ready a manuscript if you haven't mastered these skills. It doesn't mean your book sucks. It doesn't mean you're a terrible writer. You're just not ready to query--or close enough to ready to query to get there in a month.

And guys--big glaring take home lesson from my own querying experience here--YOU DO NOT WANT AGENTS TO SEE YOUR PITCH IF YOUR BOOK IS NOT READY. You only get one chance to query an agent. Don't you want your manuscript as strong as it can be before you do?

These are the folks who are going to get recommendations from me that they spend more time with critique partners. If your response to that is "I did that already" then you need new critique partners because the ones you have are either not strong writers themselves or are not giving you what you need to tighten up your project. Either that or you're not listening to them.

This eliminated thirteen of you.

This was also the point when I started making requests. And I made requests based on all sorts of reasons--the query was hilarious and yet professional, the concept grabbed my attention, I knew you from Trick or Treat with Agents, or that it was obviously well-written. I also requested pages or synopses from a couple people whose queries were unclear but whose pages I liked enough to want to see if I could figure out where you were headed.

This was Thursday or Friday night, and I still had 46 people left to consider. I officially started freaking out. And--candidly--attempting to pawn you off on other mentors. Seriously, I was SO glad when you guys started getting nabbed up because I didn't have to find a reason why I didn't want you.

~At this point there were 46 of you left for me to consider. Some I had requested mss from, but not a whole bunch at that point. Gmail was being really fun for everyone involved, so for those of you that emailed me personally I was able to move forward in requesting or rejecting, but for a lot of you I hadn't even seen your queries yet. So the next pass was just of people who sent me your queries at my personal email address. Those that got moved into the "pass" pile at this point were primarily people whose stories I just didn't connect with. I read your query and your pages many, many times (for real I have a couple memorized I think.) There wasn't anything more wrong with the writing than anyone else's, I just didn't feel like I was excited enough about your concept to make it my one-and-only-one mentee. And I knew that because there were other people's manuscripts I was excited about at that point. I'd already scooped up my main pick and another manuscript that eventually went to another mentor, so with needing to narrow it down to a total of three, you had to measure up to my excitement about those in order to stay. Eventually I got back into the gmail account and did some of that there as well.

~There were now 23 of you. 23 manuscripts (basically 1/3) that I requested either synopses, pages, or both from or that I got from the inbox if you sent them to someone else. (I'm sneaky like that.) I was getting desperate to narrow the field. At that point I went back and read all the synopses again. I was trying to make sure that I was in love with your story from start to finish. I didn't feel like it was my place to decide how your story ends. (In case you can't tell, I'm still having recurrent trauma from reading ALLEGIANT.) As I closed in on ten manuscripts left, I rejected 2 because I hated the ending. One of you (and you will know who you are because you will get an earful about it! Lol) I screamed "NO!" at my computer and startled my dozing one year old when I read the ending.

At the same time, there were seven of you I was holding closely to my vest and hoping like hell no one noticed them. I didn't realize I was doing it, but I was. While some of you I was excited to see someone else ready to champion your work because I knew you were going to a good home, that wasn't the case for these seven. And on Sunday night I realized that those were the seven I needed to hang on to because in addition to loving them, I was also thinking "I can really help this author make this book shine and I have concrete ideas of how I would do that and I think I can do it in a month."

~I showed my hand to the rest of the mentors to see if anyone was considering them. And the showdown with Monica over the pitch that would eventually become her #1 began. I lost (boo!) but it was a good thing because now there were only six of you.

~Two other mentors grabbed two of you as alternates, leaving me with four.

I told Rae and Brenda I wasn't going to pick between the remaining for, that I was going to keep you ALL. They said suck it up, butterfarts, this is war.

So I did. And here's how things turned out.

Honorable mention goes to Katie O'Shea's THE SHADOW OF A DREAM (YA SciFi) who was my #4. Katie, I'm still going to give you gobs of feedback it just make take me a little bit to get there.

Second Runner Up: BACKLASH by Christy Little is a YA Contemporary about an accidental techno-bully. I fell in love with the exquisite timeliness of the concept and the voice really grabbed me.

First Runner Up: THROUGH THE WALLED CITY by Alexandra Alessandri whose multicultural YA Magical Realism I could not put down to save my life.

My Warrior Pick: GASLIGHTS IN VAUDEVILLE by Sonia Hartl is a NA Thriller whose world-building I immediately fell in love with, characters grabbed my attention away from my own story I was supposed to be working on, and whose writing is utterly and completely gorgeous. I cannot wait to get my hands on your words.

Some other worthy mentions...

Thanks to Brooks Benjamin for letting me pick on him incessantly. I cannot wait to see what you and Marieke do with TIGHTS! Peace, love and butterfarts.

Boo hiss (and props) to Christopher Keelty for refusing to bend to my demand that ANDROMEDAN SONS be a New Adult so I could steal it! :)

Most hilarious ass-kissery in a query: Robb Dunn

Best use of the word Bildungsroman:  Shawn Ingram

Most creative use of technology in mentor stalking: Cassandra Page

Writer who is getting the most off-the-wall rejection letter from me: Keely Hutton (It's good, I think.)

Okay, so basically, the point is, I love you all. I hope you find my feedback helpful (when you get it. I've got a lot going on so please be patient with me.)

There's no ass-smoke-blowing going on over here. I really think I had the most collectively talented inbox in the entire competition and you guys made it impossibly hard to decide. More than anything, I hope you have learned loads, made some new beta and CP connections, and will stay in touch.


At the end of this month, I've got a special surprise planning for all 63 of you. I just need to get the details ironed out first. So stay tuned!
Posted by Dannie Morin at 4:25 PM